With the recent volatile movements in the Currency markets and substantial weakening of INR against the USD here are some more analysis on SGD/INR conversion.

The trend shows a beta of appx. 2 between the depreciation of INR against USD as compared to SGD against USD.

The latest market buzz is for the INR to depreciate to Rs.54 against the dollar on a conservative basis and Rs.56 on a pessimistic basis due to balance of payments situation, falling GDP growth rate and overall withdrawal of Foreign Direct Investment.

The interest rate gain for three months would avg 2% [(9% (indian Fixed deposit rate) – 1%(singapore deposit rate)/4] so even if rupee weakens down to 56 against the dollar you stand to gain 5%-2% = 3% if you hold for three months and 1% if it touches Rs.54. Given the interest rate diffrential and probability of more than expecetd weakening of SGD against the USD (beyong 1.617), it is a even better time to convert SGD to INR

The Singapore dollar has held a pretty steady rate averaging Rs.32.25 / SGD in the past few months. We try to explore why borrowing in SGD and converting to INR is a good idea at this point in time.

The Economic Perspective
The Singapore economy has slipped into technical recession and the growth rates are projected to be within the 2% mark for 2009. India on the other hand projects a growth rate of 6-7% for the current year. In a nutshell the Indian economy is still growing which should result in a greater demand for Indian currency as compared to the Singapore dollar.

The average bank savings rate in Singapore hovers around the 1% mark as compared to 4% in India.
The long term fixed deposit rates for upto a year fetch appx. 2.5% in Singapore and 8.5% in India.
A one year return analysis will show that SGD against INR should move to 34.40 in a year’s time to maintain exchange rate equilibrium:

Most of us would have heard about the classical derivatives strategies like Straddles and Strangles, but the world of derivatives trading has much more to offer. Jelly Roll and Put Ladder are two of the lesser known strategies which are quite useful in volatile times.

This is a time value trade (involving the sale and purchase of options with different expiry months) and as such cannot be adequately plotted in terms of its risk/reward profile.

Profit & loss characteristics at expiry (of near synthetic):

The potential profit of this trade is restricted as it arises from a widening of the futures price differential of the expiry months in question. After the expiry of the near term options, the holder is left with a long synthetic underlying position. The holder will therefore benefit from a rising market after the first expiry, and will be adversely affected by a falling market after the first expiry. 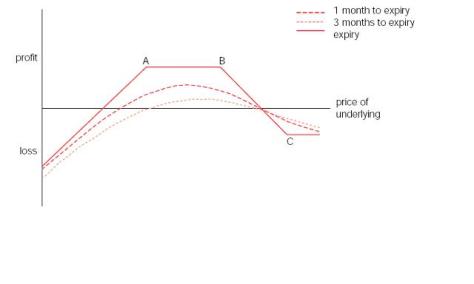 Market expectation: Direction bullish/volatility bearish. Holder expects underlying to(continue to) be between strikes A and B and firmly believes that the market will not fall.

Profit: Limited to the difference B-C, plus (minus) net credit (debit). Maximised between

strikes A and B.

Loss: Unlimited if underlying falls. At C or above, loss limited to net cost of position.

Break-even: Lower break-even reached when the intrinsic value of the purchased put C

plus (minus) net credit (cost) is equal to the intrinsic value of the sold options A and B.

Higher break-even reached when underlying falls below strike C by the same as the net cost of the position.

The straight forward answer would be to say…lesser consumption leads to lesser demand leads to lesser production results in lesser green house gasses and in turn a cooler earth.
But digging a little deeper we find that the reduction in production is OPEC’s way to ensure that the Oil price atleast staibizes, around $45 mark if not march towards its recent glory.
So if falling prices are the motivation to reduce production then lower prices should also result in an increase in consumption, albeit with a lag. The general consumer is cautious given the recent super spike in oil.
If the prices remain subdued for a fairly long time, the consumers are bound to return to gas guzzling vehicles and heavy energy use.
Though we should remember that this time around there have been substantial investments and initiatives towards alternative energies. These should start to become commercially viable in a few years time (hopefully by the time next oil spike is ready to happen).
What we do not know is that how these alternative sources of energy would impact the global warming. In a few years time we might realise that the energy harvested from the oceans impacts the ocean currents which in turn adversely effects the weather pattern thereby increasing the global warming. There could be similar undiscovered effects using the nuclear energy, wind power, hydro power etc.
So if you want a “cooler” earth, reducing energy consumption is the only long term viable option!

SGD/INR Up Trend: Cause and Impact on the average Indian

The long term volatility remained at 5% which made this a relatively stable currency pair.

We will try to analyse the possible reasons and for this uptrend and the impact on the average Indian.

What’s causing this spike?
1. Inflation
The island city country imports most of the consumables from food to gasoline to clothes from neighboring and other countries. The steady price rise and demand supply imbalances in these exporting countries have created inflationary pressures. Singapore which has enjoyed a low inflation of around 2.5 ~ 3 % for last few years is now expected to face inflationary trends of up to 5%. The MAS (Monetary Authority of Singapore) has been forced to undertake a gradual appreciation of the Singapore Dollar to maintain the purchasing power parity of its nationals.

2. Reduction in the Dollar Peg
The Sing dollar was historically pegged against the US dollars but with the recent USD weakness the currency as now been pegged against a basket of currencies which has a reasonable Euro bias. The Euro has been strengthening against all major currencies thereby imparting strength to SGD as well.

3. Crude oil Prices
The unprecedented rise of the Crude oil price from US$ 53, 3 years back to the current prices of US$136 has also caused this range bound pair to move in the same direction.
Singapore imports all petrol and other crude oil products for its use. A simple analyses shows a direct correlation between the pair (SGD/INR) and the crude oil.

Impact!!
1. Exports
With INR weakening against the SGD, the exporters have all the reasons to cheer. Singapore just might be the platform for them in to the South East Asian markets.

2. Employed in Singapore
The Indian expatriate population in Singapore is around .25 million people and the rising SGD has brought smiles to their faces. The remittances to the home country are bound to rise but with the increasing cost of living the upside there might be limited. In a nutshell their remittances have been adjusted for Oil led inflation.

3. The Vacationer
Singapore has been the favored tourist destination for Indian’s but with the SGD having appreciated by close to 16% the holiday costs are on the upside. The Indian vacationers could start to limit their tours to Malaysia and Thailand as a result of these costs.

The Road Ahead…
The MAS has indicated to allow the SGD to strengthen against the USD up to 1.25 by the end of this year dependant on need to reign in inflationary pressures. The current rate is 1.36 and was 1.43 for USD/SGD at the beginning of this year.
If the USD/INR stays at the current levels of Rs.42.5 / USD the year end rate for SGD/INR could reach Rs.34 / SGD if everything else remains the same. Given that Oil is traded in USD and India is a net importer of oil the demand for USD should rise in turn pushing the USD/INR upwards.

The mathematical model encapsulating the above information indicates the SGD/INR movements with respect to crude Oil as tabulated below:

SGD just might be your hedge against the rising Oil Prices!!