Ever since the Prime Minister Modi came to power the feel good factor about Indian economy and India has increased dramatically. All Indians, including me, are rooting for improved Indian economy – infrastructure reforms, streamlining of tax code, improved law and order and not to forget getting back the black money stashed in overseas accounts. The expectation also is for the Rupee to strengthen as reforms kick in and help kick-start the much-anticipated economic growth.

The past few months have seen the pair oscillating between the 46-49 range and the volatility in the forex markets has been nothing short of a roller coaster ride. The pair dropped all the way to 46.5 after  the elections and bumped back up towards 49 only to test 46.5 again as the oil prices slid in the international markets (I was expecting a 45 floor as mentioned in replies to questions in the previous post). 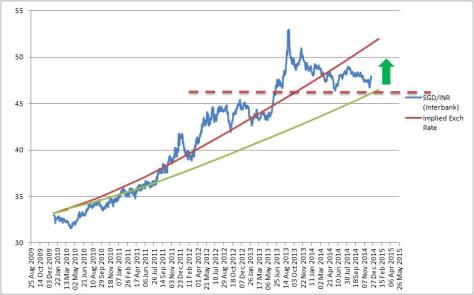 INR has weakened against the USD to 63 as I had written earlier in (SGD INR: Post Election Euphoria) but interestingly SGD has also weakened in tandem. At one point in time the fall in SGD was greater as compared to INR and caused SGD INR to test 46.5.

Oil has fallen dramatically in the past few weeks and raised concerns of Central Banks not being able to meet their inflation targets prompting talk about monetary easing. A falling oil is good for India’s Forex reserves which has lent some support to the Rupee. On the other hand though the market sentiment remained weak as India’s trade deficit widened to one-and-a-half year high of $16.86 billion in November due to over six-fold jump in gold imports. Trade deficit in November last year was $9.57
billion.

The key events in play as I write are:

Falling oil prices can make the FED hold on to rate hike and also bring strength to SGD as the safe haven theory comes back into play. My expectation is for the Singapore Dollar to appreciate back to sub 1.30 level and Indian rupee to move upto 65 level which would bring the SGD INR back at the magical 50 mark in time for Singapore’s 50th birthday