Time flies and it’s already June – I can’t believe that the last I wrote about INR was in February and whole world was speculating on the outcome of the Indian elections. I did not expect the BJP to win with a full majority given the polarisation of votes, combined with regional politics and was expecting a hung parliament.

Based on that I had predicted that the Rupee would fall back to the 63 mark against the USD and 50 against the SGD (SGD INR: A storm in making). However, to my delight, the BJP did get a full majority. This meant that the uncertainty of a hung parliament and issues cropping up from coalition government were instantly non issues.

The markets reacted favorably to a government formed by progressive and reform oriented leaders and pushed the Indian Sensex to all time highs of over 25,000 and Rupee appreciated quite quickly to the Rs.58 mark against the USD. With many a Indians residing in foreign countries who remit money to India the obvious question was – Is the rupee headed to 55 against USD and should I transfer money to India now?

One of the first places to start when looking at fundamentals is Implied Exchange Rate calculation. Over the past years the spot rate has tended towards the Implied Rate Line (chart below: using SGD INR) 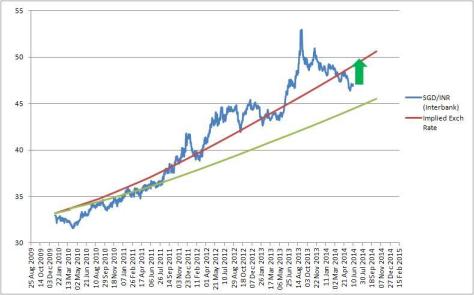 and the calculation suggests that the SGD INR would move back towards the upward trending implied exchange rate line as the RBI is going to hold the interest rates steady – the inflation is still alarmingly high.

Other factors that would be playing against the Indian Rupee would be:

2. Increase in price of crude if the tensions in Iraq escalate

3. Global slow down in the background Ukraine crisis and escalation in South China sea