Rupee is Overvalued and should depreciate – something I have been saying for 3-4 months now but for lack of time had not been able to do some research and share with everyone my thoughts behind the my assertion.

“I think we have to be opportunistic, when there is a chance to allow it to drift down maybe a little bit it drift down but when lot of capital is coming in intervene to keep it stable,” Subramanian had said. “I agree that there is a part of the community out there that wants a strong exchange rate, but that would be very detrimental to our exports”

The rupee has been stable against the dollar but has appreciated against a basket of currencies, severely effecting the exports competitiveness. India’s exports declined for third month running in February. Rupee has appreciated 22.4% against the euro in the current financial year. On a trade-weighted basis, and after adjusting for inflation, in February rupee was the rupee was over 24% overvalued against a basket of currencies of India’s six largest trade partners.

The below table shows the performance of Indian currency against major currencies and the Rupee has strengthened against every currency other than USD and Chinese Yuan, the direct impact of this strengthening is that exports to these countries be it Software, Services or Goods all become less competitive 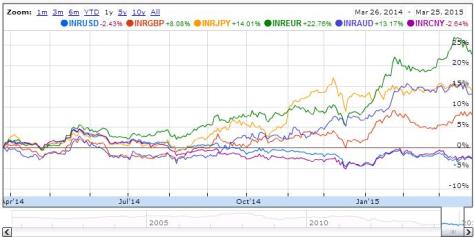 Now lets look at the competition – Countries that export goods and services to the nations above –  big ones being Indonesia, Malaysia, Brazil, Russia, South Africa and the currency of all these countries have depreciated against Indian Rupee giving an advantage to competition. 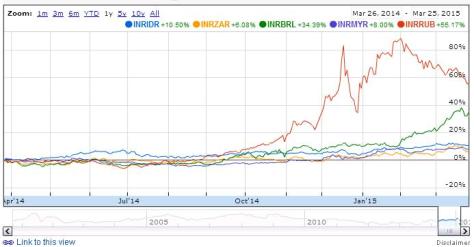 I think it’s a perfect time for India to weaken the Rupee while Oil remains low to boost competitiveness of exports and fill up our foreign exchange reserves. At the same time build oil reserves so that even when oil prices move up we don’t have to strengthen the currency in tandem to prevent the outflow of petro dollars.